Professor Mark Thompson chairs the Digital Leaders 4th Public Sector Innovation Conference. Read his chairs blog and closing remarks on the next stage of digital adoption in the public sector.

“A therapy session for those trying to change government”

On 8th March, I again had the privilege of chairing the Digital Leaders Public Sector Innovation Conference in the wonderful surroundings of London’s RSA, and – joy of joys – we were able to be all together for what was for many delegates the first face-to-face public event since lockdown began. There was also, of course, a sombre backdrop for this year’s Conference, and, standing for the Ukrainian national anthem at the start of our conference, I was struck by Mykhalio Federev, Ukraine’s Minister for Digital Transformation’s, concept of ‘government-in-a-smartphone’: pretty much an encapsulation of everything our conference is (or should be) about.

8th March was also International Women’s Day, and so we were fortunate to be able to hear a passionate keynote address marking this event from Jacqueline de Rojas CBE, President of Digital Leaders. Alongside the acknowledgement that public services have a particular ethical imperative to be inclusive, Jacqueline presented a range of compelling evidence that gender-diverse boards produce better business decisions (for those still requiring a reason).

Unfortunately however, there is a danger that gender bias can increase exponentially as it becomes embedded in technology infrastructure – which is often designed by men, for men – and thus we need to be especially vigilant in the tech industry for unconscious bias, since (here Jacqueline quoted John Amaechi) ‘Culture is Defined by the Worst Behaviour Tolerated’. 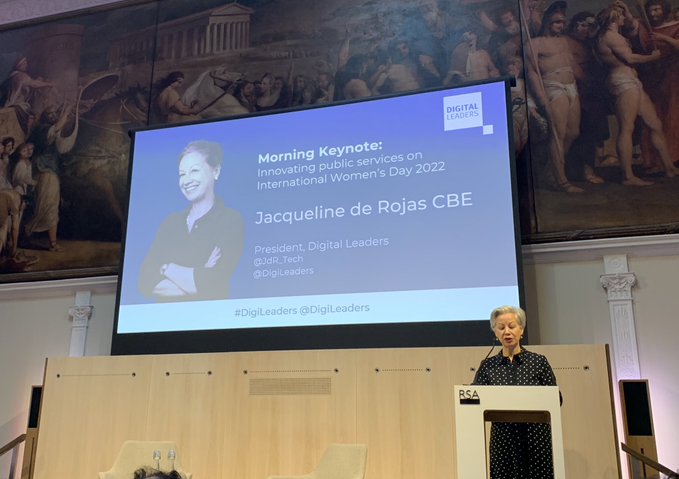 The stand-out phrase from this conversation for me was the observation that public cloud is “increasingly the backbone of transactional government”. This being the case, designing for increased use of cloud-native services becomes ever more essential for government – as does an increased willingness to overcome traditional silos and share data: there has been evidence that as a result of the pandemic citizens are now more willing to share data with government than departments are to share data between themselves! 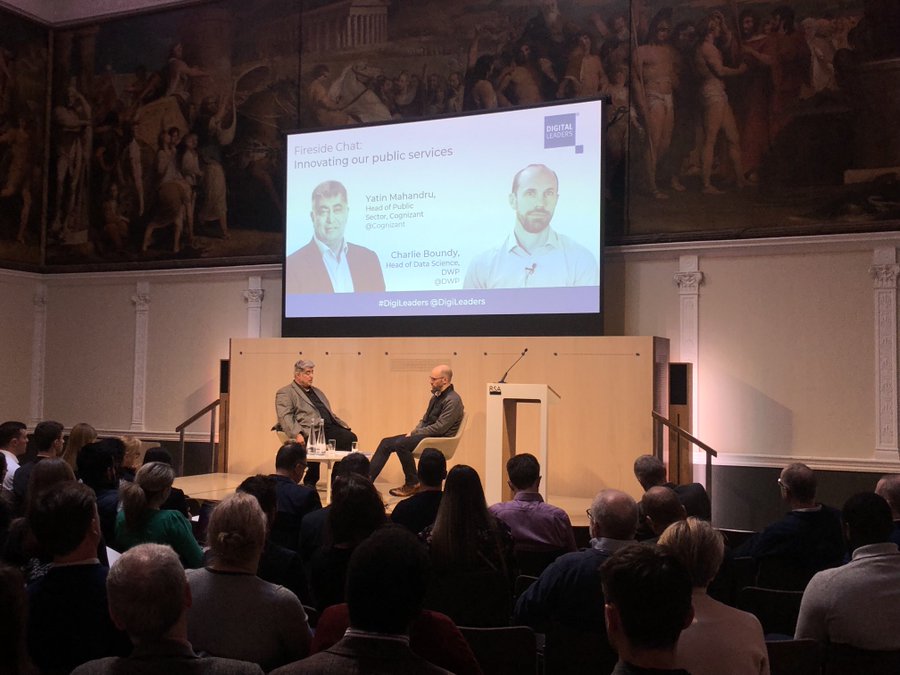 I then invited three speakers up for our first panel discussion, on innovating with platforms: Paul Morrison, Director of Planning and Transformation, DLUHC, Laura Gilbert, Director of Data Science, 10 Downing Street, and Satpal Biant, Head of Public Sector at SAP. Cross-silo collaboration was the clear theme here. Paul began by underlining the importance in his view of building the skills and leadership at senior levels in government to conceptualise how adoption of digital technology can shift our understanding of business purpose: even where groups are agreed on a broad direction in local government, “people remain stuck on the how”. Reflecting Charlie’s comment, above, Paul called for more generosity in supporting cross-government collaboration, whilst also respecting peoples’ current legacy constraints.

Continuing the theme, Laura offered a range of fascinating examples of the insights that can arise from conducting cross-department data science activities that have resulted from her team’s ‘skunkworks’ activities – and the value of ‘showing people that this works’. Satpal’s comment that ‘it can feel risky to talk to outsiders but it shouldn’t’ resonated strongly with the collective acknowledgement of the need to ‘shift the dial’ on cross-department collaboration and data sharing – and he amplified this message by calling for more work on identifying potentially common, cross-departmental business processes spanning both back and front office. 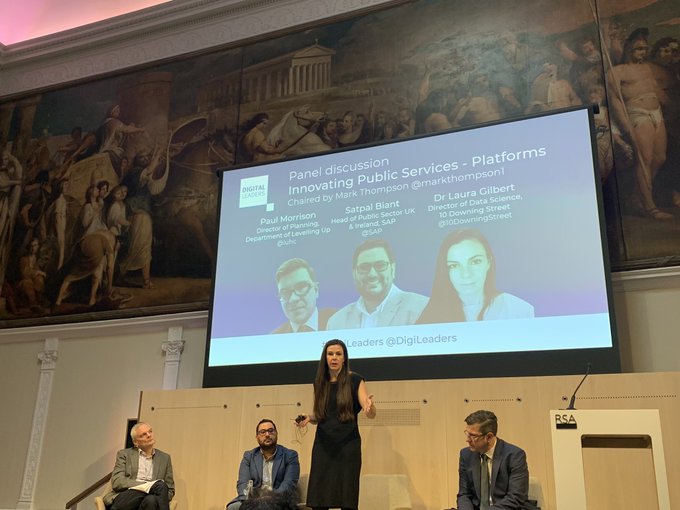 Following morning coffee, our second theme, data in government, opened with a keynote from Alison Pritchard, Director General ONS. For me, two key themes stood out from Alison’s talk. The first was ONS’ clear shift, during the past few years, from a sort of public records office – to the data heart that pumps at the centre of an increasingly digitalised government. This new centrality, and importance, was in evidence during the pandemic, when ONS was able to produce startling range of rich pictures of what was happening on the ground that policymakers increasingly came to rely on.

The second key insight for me was a glimpse into the emerging ‘architecture’ for our national data backbone – the IDS (Integrated Data Service) for managing the UK’s critical national data assets, which contrasts with traditional ‘data lake’ approaches in being markedly federal in structure: a ‘pan-government network architecture’. 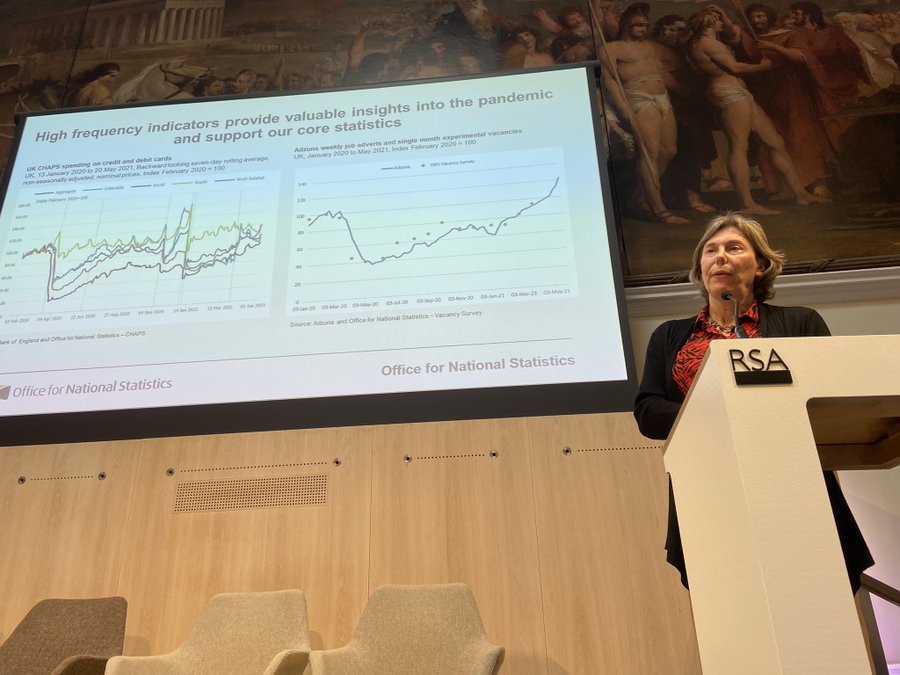 I then invited our second panel up to the stage to discuss use of data to drive innovation: Robin Sutara, CDO Microsoft UK, Svetlana Videnova, Technology Director, Data & AI, TPXimpact, Paul Maltby, CDO, DLUHC, and Alan Brown, Professor of Digital Economy, University of Exeter. Robin opened by arguing that building a culture of increased data use in government rests on five ‘categories of transformation’: citizen experience, employee empowerment, operational cost savings, new apps and services, and sustainability goals. To these priorities, Lana added countering increased dis/misinformation, preparing for more automation, adopting common data standards, modernising infrastructure, thinking about how data can enhance citizens’ experience of interacting with services, and the need for government to be able to move more quickly using insights that data brings.

Perhaps, for me, Paul’s categorisation of three types of data priority stood out in particular: data for analysis (he noted a welcome new enthusiasm for doing this in government); data for new services (not just to drive policy as used to be the case); and data for external consumption (he noted a new enthusiasm for dashboards, and for democratisation of data). Finally, Alan outlined three very useful lenses through which he believes government’s ability to scale use of data will be viewed: trust (citizens’ confidence in government as data user); risk (the perception of which is always contextual and dynamic); and value (perceptions of the value of innovations that are made possible through sharing data). A great panel. 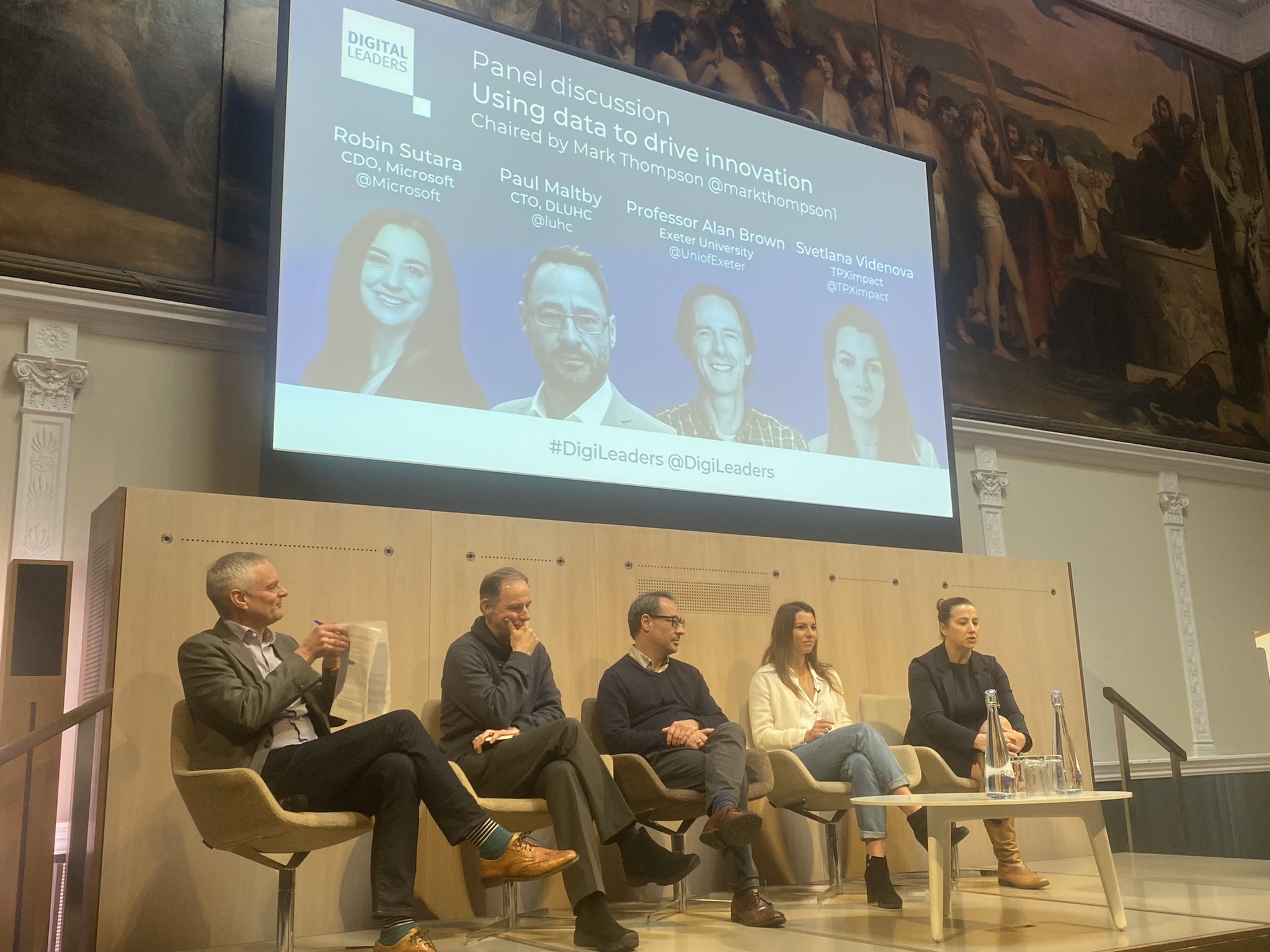 Before breaking for lunch, we heard from Seth Finegan, CEO UK, Informed Solutions, who offered a very insightful summary of the last 10-12 years of ‘government digital’: from an initial focus on the ‘front end’, UX, of service design, through more of a focus on back office, through to a realisation of the importance, today, of data and AI in facilitating a shift from transactional to data-driven targets around enabling new service outcomes (reflecting Paul Maltby’s ‘data for services’).

Reflecting the themes of the conference, Seth also underscored the growing focus on using the capabilities of emerging technology to extract insight from data once it has been migrated to a hyperscale environment, presenting government with the possibility of driving more holistic, cross-silo social outcomes. 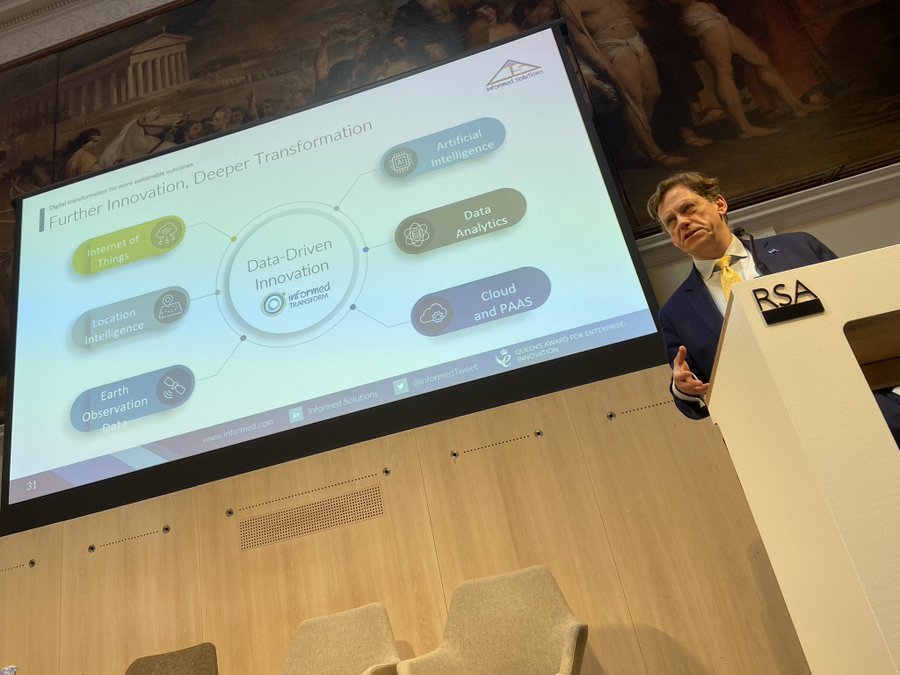 Lunch was followed by an afternoon keynote from Matt Hancock, MP for West Suffolk, who drew on his recent experiences as Health Secretary during the pandemic. Matt pointed to a number of successful initiatives that had been driven through a new ‘can-do’ attitude towards adoption of tech tools. These, he argued, were enabled by three key things: a common sense of mission, accelerated by the pandemic; regular proof points of what worked and what didn’t; and top-level commitment. Collectively, these three elements constituted a recipe for business model change in the NHS, which saw accelerated adoption of technology to drive accelerated, data-driven adaptation of front-line services. 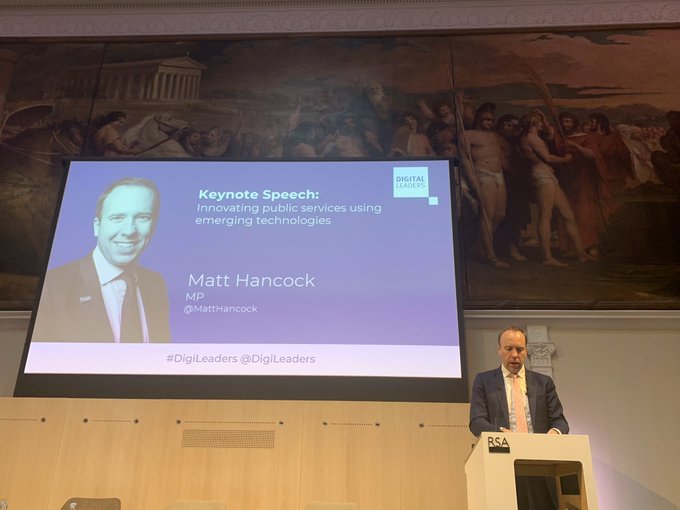 Our third conference theme, emerging technology in government, was keynoted by Martin Bellamy, CIO Houses of Parliament Restoration and Renewal. Martin offered us an insight into the essential technology and data backbone that will run through this vast civil engineering project. In particular, digital twinning technology is proving essential for modelling the ‘smart building’ elements of the refurbishment – both in identifying and co-ordinating its vast complexity and in ensuring that the future Houses of Parliament are run from a common digital platform with a single source of data. 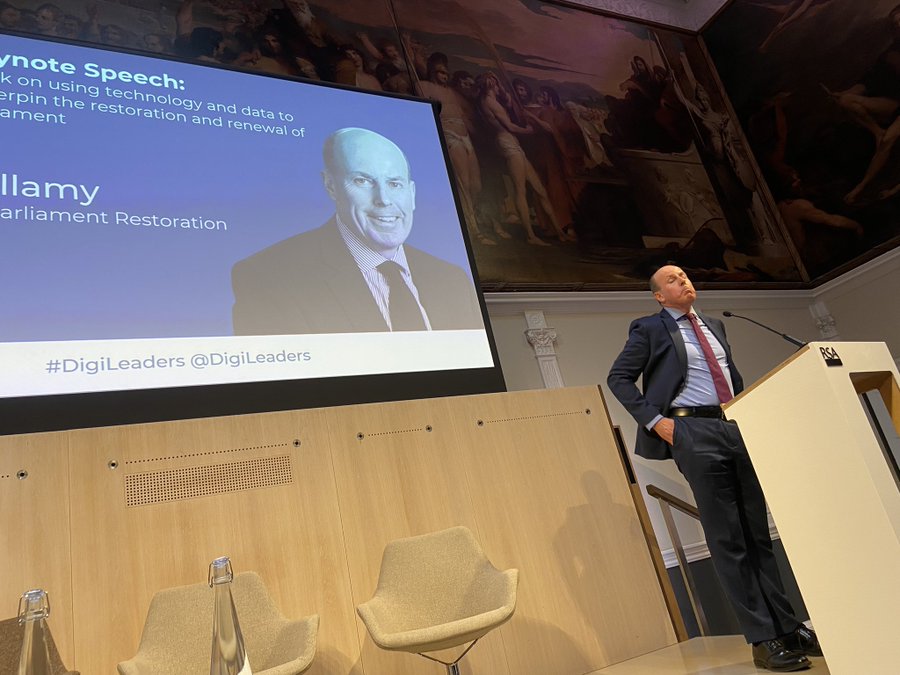 I then welcomed our final panel of the day up to the stage to discuss emerging technology in government: Thalia Baldwin, Director Geospatial Commission, Alexander Holt, founder of the CivTech Alliance, Scottish Government, and Priya Guilani, UK President of the Government Blockchain Association. Alexander kicked off with the quote of the day (see blog title) – and offered us some really useful examples of the way in which the use of emerging technologies in government fundamentally challenged traditional distinctions between public, private, and third sectors – and illustrated his point with stories from his extensive experience of scaling networks that span these three sectors.

Priya discussed the potential importance of blockchain as an enabler for social and financial inclusion, but cautioned against a tendency to use distributed ledger technology to digitise rather than transform, services (where have we all heard this distinction between merely digitising vs digitalising/transforming before?) – and the continuing importance of an open data and interoperability mandate for such technology to be able to do this. Finally, Thalia offered examples of how government is starting to maximise value from location data to power its services – putting spatial analysis at the heart of future policy-making. 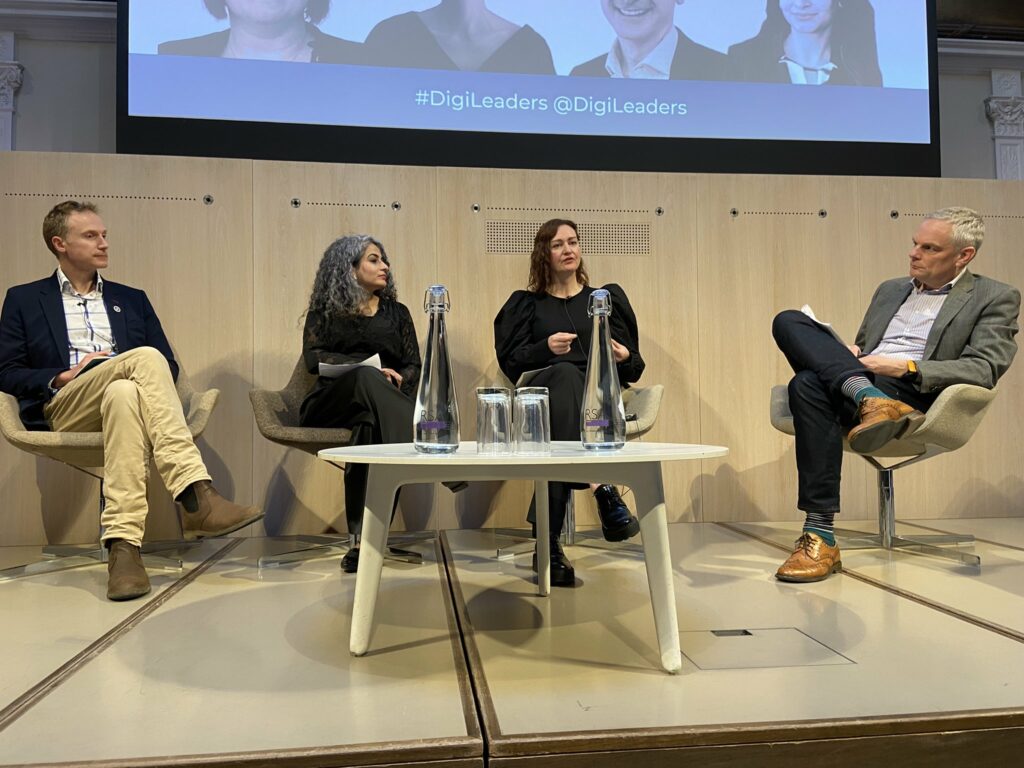 To conclude, our conference plainly showed how (cloud-based) platforms, data, and adoption of emerging tech in government are very tightly interwoven, to the point that you can’t really do one without the others – and will increasingly constitute (to quote Charlie once again) ‘the backbone of transactional government’. It also showed, however, that if government is to continue to modernise – perhaps one day to offer citizens the sort of innovative services envisaged in Mykhalio Federev’s ‘government-in-a-smartphone’, digital leaders will need to work much harder to drive an architectural interoperability, and a cultural willingness to share and collaborate together. Understanding more about what this means in practice, and continuing to endorse its importance across the digital leaders community, is what, in my view, these conferences should all about. A great day.