Dazzled By the Women In IT

This week on Wednesday evening I was lucky enough to attend the Women in IT Awards.

Over 1,200 business and technology leaders attended what is being described as the world’s largest tech diversity event in London as award winners were crowned across 21 categories. The awards, organised by Information Age in partnership with Amazon Web Services, serve to showcase the achievements and innovation of women in technology and identify new role models in a sector where female representation stands at only 19% — a definite improvement since the awards programme began. The awards were held in Grosvenor House Hotel on London’s Park Lane and were hosted by Gadget Show presenters, Ortis Deley and Georgie Barrat, who revealed 21 winners chosen from over 800 nominations. The seating plan was impressive.

I was invited by The Home Office – Immigration Technology Portfolio who were profiled at awards. The team was shortlisted as IT Team of the Year and Natalie Jones – a member of the Senior Leadership Team and DDaT EU Exit Lead – was nominated for the Future CIO of the Year award.

Unfortunately, the Home Office wasn’t successful in these categories, but Natalie received a special mention for her work delivering the EU Settlement Scheme.

The percentage of female IT leaders globally remains at 9% – a figure that has changed very little in the past few years despite one third of organisations claiming to have diversity initiatives. Stereotypes surrounding the types of roles available in tech industry has added to the steady decline of women entering the tech workforce.

The Women in IT Awards series aims to tackle this issue and redress the gender imbalance, by showcasing the achievements of women in the sector and identifying new role models. Well done to the Immigration Technology Portfolio team for these nominations. The portfolio has already won five awards and continues to prove itself as an industry leader. 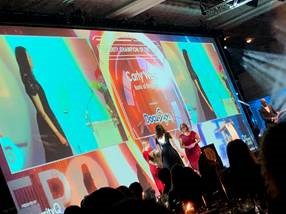